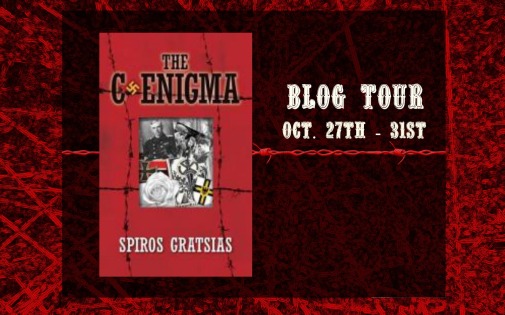 Author, Spiros Gratsias gave me the inside scoop(thanks to Elite Book Promotions) on the main character in his exceptional new book The C Enigma, to learn more about him. So I thought I’d share it with all of you!!

Without further adieu here’s my interview with Matthias Adkins, the protagonist of The C Enigma:

What is your character’s name? Does the character have a nickname?
The main characters name is Matthias Adkins.

What is your characters hair color? Eye color?
His hair color is darker-than-black and he has light green eyes.

Who are your characters friends and family? Who does she surround herself with? Who are the people your character is closest to? Who does he wish he were closest to?
His grandmother and girlfriend are the closest and most important people in his life. Unfortunately the most important characters in his life; father, mother and grandfather have died. He wished they had not and has a deep hidden loss of their support and presence.
Where was Mathias born? Where has she lived since then? Where does he call home?
He was born in Oklahoma City and has lived there all of his life.
Where does your character go when he’s angry?
His anger and overall feelings are pushed internally and he does not share them. His work as an anthropologist is also his getaway therefore he finds solace at work in his office at the university.

What is Mathias’ biggest fear? Who has he told this to? Who would she never tell this to? Why?
His biggest fear is losing another loved one..
He does not share this fear but lives with it especially in his dreams or better yet nightmares.
What is in your characters refrigerator right now? On his bedroom floor? On his nightstand? In his garbage can?
Refrigerator: Chinese left-overs, frozen pizza, beers and red wine.
Bedroom Floor: Gym socks, running shoes, national geographic magazines.
Nightstand: 3 books on anthropology, a high tech radio receiver, a vintage compass.

When your character thinks of his childhood kitchen, what smell does she associate with it? Sauerkraut? Oatmeal cookies? Paint? Why is that smell so resonant for him?
His Grandmothers Apple pie. The smell reminds him of his Grandfather and the game of hide and seek they played together.
Your character is doing intense spring cleaning. What is easy for him to throw out? What is difficult for him to part with? Why?
Mathias does not like to through anything away because the sense of loss reminds him of his biggest loss, parents and grandfather.

Its Saturday at noon. What is your character doing? Give details. If hes eating breakfast, what exactly does he eat?
Saturday noon he is reading a classic novel or watching a classic old movie with Linda.
He enjoys French toast and crispy Canadian bacon.

What is one strong memory that has stuck with your character from childhood? Why is it so powerful and lasting?
Playing and recreating the pirate characters from “Treasure Island” with his Grandfather.

Bio
Spiros Gratsias is a native of Montreal, Canada, born to Greek immigrants. He moved back to Greece twenty years ago and has been living there ever since. Gratsias has a master’s degree in manufacturing technology and thirty-five years’ experience in the aerospace and consumer goods industries. An amateur painter and dedicated student of history, he devotes much of his time to reading and writing.

Stories that will consume you and ruin you.