This is my stop during the blog tour for Raindrops on Roses by Millenia Black. This blog tour is organized by Lola’s Blog Tours. The blog tour runs from 9 till 22 February, you can view the complete tour schedule on the website of Lola’s Blog Tours: http://lolasblogtours.net/blog-tour-raindrops-on-roses-by-millenia-black/ 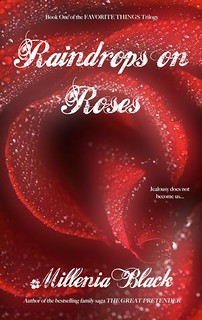 Blurb:
What happens when the man you love falls in love with someone else?

Mayfair Island, Florida. Grief-stricken after the sudden loss of her beloved grandmother, an enduring but reclusive Hollywood icon, young Priscilla Bauer finds herself adrift and looking to find solace in the arms of her vast inheritance, when she meets the kind and considerate corporate brand designer, Michael Frost—a drop dead gorgeous beacon of light in her all too dark night.

Falling hard and falling fast, Priscilla has no idea she’s stepped into dangerous territory…Because someone else has already branded Michael Frost her very own—and she has no intention of ever letting him go.

Passions are high, but bitter vengeance gets even higher!

You can find Raindrops on Roses on Goodreads

You can watch the trailer for Raindrops on Roses on Youtube

Millenia Black’s Raindrops on Roses was a great read. I really liked Priscilla, I thought she was sweet and I would be her friend if she was a real person. I also really liked Amber, I understood her pain and confusion and even her desperation. The author wrote them Amber in particularly very well. The entire read was quite good but I truly hated Michael. I have never disliked a character as much as I hated this lead male. Priscilla deserved better and Amber, my God, did she deserve so much more than to be tossed aside like so much garbage.

I’ve read other reviews calling Amber crazy and a stalker but honestly she was a woman who gave nearly 10 years worth of love into a relationship with a man who decided on a whim that he was bored of her and wanted the new young thing. He cast her aside and so abruptly, it wasn’t as if she took their relationship for granted or anything. He was a cretin who decided to pursue a grieving woman at the most vulnerable time, knowing fully well that he had a long term girlfriend that up until that moment he had no problem being with. Michael literally had no plans of leaving her until he decided to chase after Priscilla, who was an innocent in the whole thing.

I hope Michael becomes a better person in the next book because right now he’s the scum of the earth yet he claims to be a nice guy. argh I hated him but I loved the two lead females so much. I am very torn as you can tell. Kudos to the writer who made me feel so deeply about a character because that is pure talent right there!

About the Author:
No one does family and relationship drama quite like bestselling author Millenia Black! Heralded as a double life and relationship expert, she’s been a featured guest on radio shows across the country, discussing the 7 Smoke Signals Your Man is Living a Double Life.

A celebrated alumnus of Keiser University, Millenia lives in the State of Florida where she’s currently hard at work on BLUE SATIN SASHES, book two of the highly acclaimed Favorite Things Trilogy!

There is a tour wide giveaway for the blog tour of Raindrops on Roses. This is the prize you can win:
– a 100$ amazon gift card